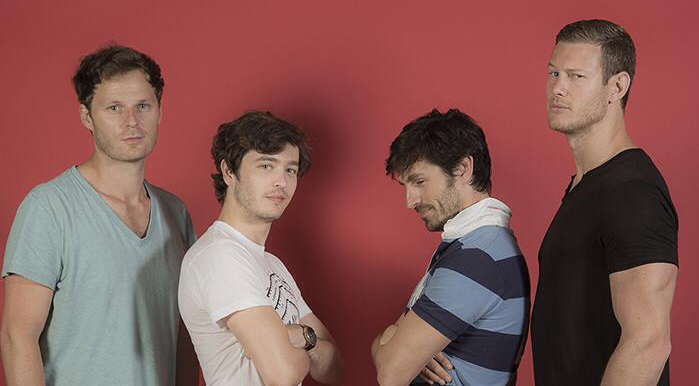 Rupert attended this convention in Madrid along with fellow knights Alexander Vlahos, Eoin Macken and Tom Hopper from BBC Merlin. Due to Rupert’s performance dates for Tonight at 8:30, he was only able to attend the con on Sunday 13 July. 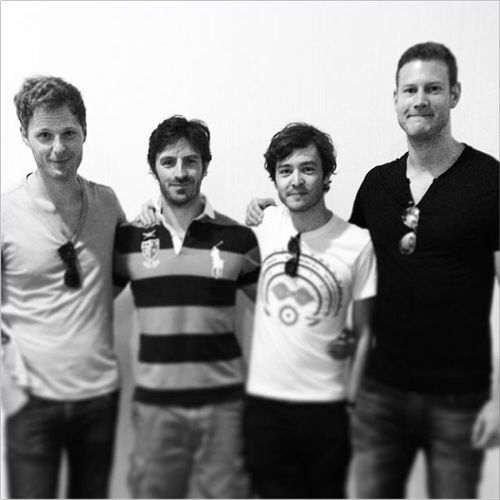 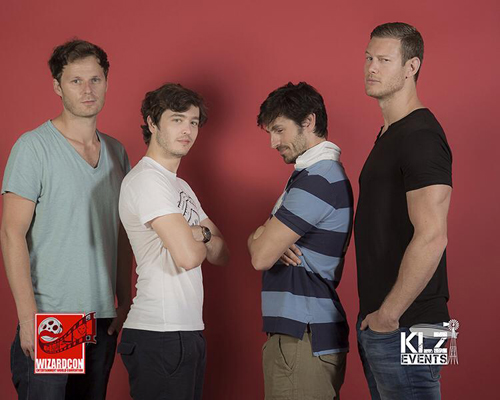 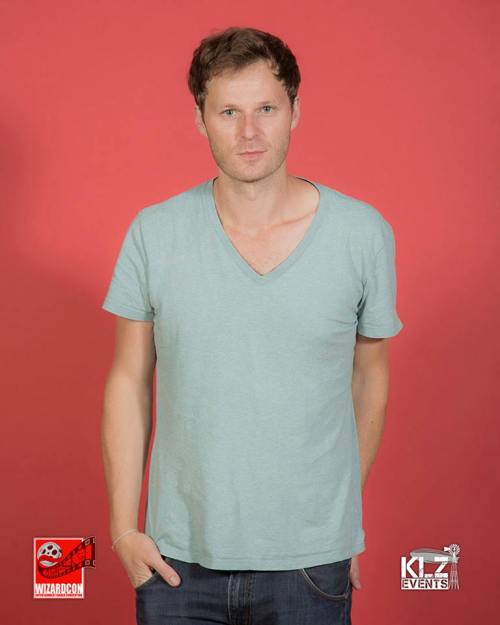 Rupert during the Q&A at this fan convention.

I had an absolutely marvellous day on the Sunday of the Cardiff Film and Comic Con, due in no small part to the presence of Rupert ‘Fabulous’ Young, and keeping company with Karen, one of my many fellow Merlin!fan stalwarts. Unfortunately we never saw our mate Nick. (Where were you, Nick…?)

My first task (and I chose to accept it) was to seek Rupert’s autograph.

I was there early, so the queues were very reasonable, and dear Rupert could take the time to chat to each of us. Not realising that he was also doing a Q&A later, I took the chance to quiz him rather!

The first thing to note is that his hair is cut quite short at the moment – he joked that, like Samson, he feels quite weak now. He said it had been for a part. However, he kept his NY baseball cap on the whole time, so I’m afraid I can’t report on the full effect!

I asked him about the Doctor Who credit that had suddenly appeared on his IMDB page – and he said it wasn’t true at all! He has no idea where that came from. So I will have to demote my post about it. (What shall I call such things? False positives…? Lies, damned lies, and rumours?)

Rupert is currently considering two offers of acting work, only one of which he will be able to accept due to clashing timeframes. One is a TV show and the other is a theatre play. He seemed in a genuine quandary – though later in the Q&A he seemed to be leaning towards the play. But it’s great to know he’s in such demand!

As we’d heard, Rupert was filming something late last year, but he seemed unsure as to whether anything would eventuate, or if/when the film appears whether his role would be included or cut. So that’s half tantalising and half frustrating!

END_OF_DOCUMENT_TOKEN_TO_BE_REPLACED

Here is a lovely long interview done with Rupert, in which he talks about possibly directing or writing, and acknowledges that these days, ‘It’s all about the dragon!’

Thanks to Manuela for the link!

As promised a long while ago, here are some fan photos taken after Cold Con 2, which Rupert kindly attended in support of Eoin Macken and Tom Hopper’s film Cold.

Rupert was one of the special guests attending this small con, at which Eoin Macken (Gwaine in Merlin) and Tom Hopper (Percival) screened their film Cold. I wrote about the con at some length on the Merlin Locations website here.

I will have some more photos to post, including some of Rupert, but in the meantime here’s a lovely one of our darling man with two rather happy fans!

Rupert attended this convention, along with fellow knights Tom Hopper and Eoin Macken.

I attended MCM Comic Con in Manchester today. And I’m going to cut right to the chase, because it’s been a very very long day, and the con was madly crowded – but then at least it wasn’t as unbearably hot as I feared it would be, given that Britain seems to be very efficiently packing a full summer into a couple of weeks!

After almost two hours of queuing to get in and then queuing some more for the Knights’ autographs, I finally caught a glimpse of Rupert, and suddenly things seemed a little brighter. Strange how that works, huh? Tom Hopper, Rupert Young and Eoin Macken were all in attendance. They were all their own lovely selves. Tom was first on the table. I asked him how he’d enjoyed Australia, and he replied very enthusiastically. He was looking very fit and tanned, but when I asked he said it was a British tan! Not surprising, really, but a little ironic.

Rupert was next, and again we talked about Australia; he asked me where I’d lived there (Canberra), and said he’d visited Perth before and enjoyed it very much this time as well. Eoin leaned in when the fan before me moved on, and after a beat said to me rather pointedly, ‘I enjoyed Australia, too, you know.’ LOL! I asked him about when he was doing the poetry recordings for the Cold crowdfunding perks, and he said in the next couple of weeks. He remembered that I’d sent him my choice already. They are lovely fellows, though unfortunately both Rupert and Eoin were hiding away under baseball caps and seemed a little quieter than usual – but no doubt they had their reasons!

Well, you’d think I’d be used to all this by now, but I was all a-flutter…