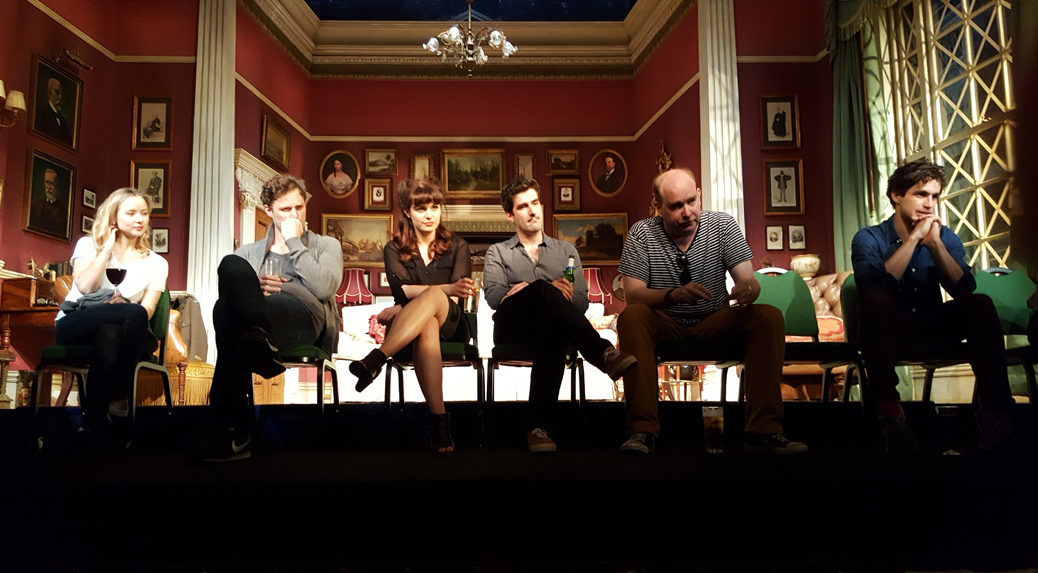 I was delighted to be able to attend the post-show talk this evening, after another hilarious couple of hours with this play – this ‘farce with a heart’. All the cast attended, which was marvellous – very generous of them indeed. I am not sure who the host was, but I assume he was associated with the Theatre Royal. There were plenty of questions from the audience, who seemed really engaged with the whole thing.

The first topic raised was the fact that this play is so unfamiliar to us. It was very successful at the time it was first produced, but has virtually disappeared since. This production has been so successful, no one can quite explain why the play has been so neglected – unless it was seen as being too much ‘of its time’. We can’t even say that once the war was over, audiences didn’t want to revisit the subject, because Rattigan’s other war-related plays continued to be produced.

An audience member asked whether it was easy to slip into such ‘antique roles’. Michael Cochrane (the Duke) immediately explained that he was antique himself. Jonathan Dryden Taylor (the Butler) said, somewhat more seriously, that Rattigan was a great writer. The characters are well delineated, and there are clues to the characters throughout the play. It’s all in the writing.

Rob Heaps (the Englishman) said that they’d spent their first rehearsal day actually in The Flat in Albany, where Rattigan had written and set the play. The owner was moving out at the time, so the place was bare, but there were two bottles of wine awaiting them. This all seemed to kick-start the process nicely!

Another audience member said that Rattigan’s plays tend to be known for repressed emotions and sadness. Were these things to be found in this play as well, even if buried deep? It was agreed that there are genuinely touching moments, and given the war-time setting, it was understandable that the characters wanted to make hay while the sun was still shining. It was also suggested that the jokes only work because there is real emotion behind them.

The seven characters are all stereotypes (as I’m indicating, a little facetiously, with my designations), so how do the actors approach making them human? I think it was Nicholas Bishop (the Frenchman) who said that they attempted from the first to rehearse as if the characters were not stereotypes. He said that director Christopher Luscombe was particularly firm on this. However, Nicholas added that farce and satire works on stereotypes, so in some ways you just have to go with it.

END_OF_DOCUMENT_TOKEN_TO_BE_REPLACED 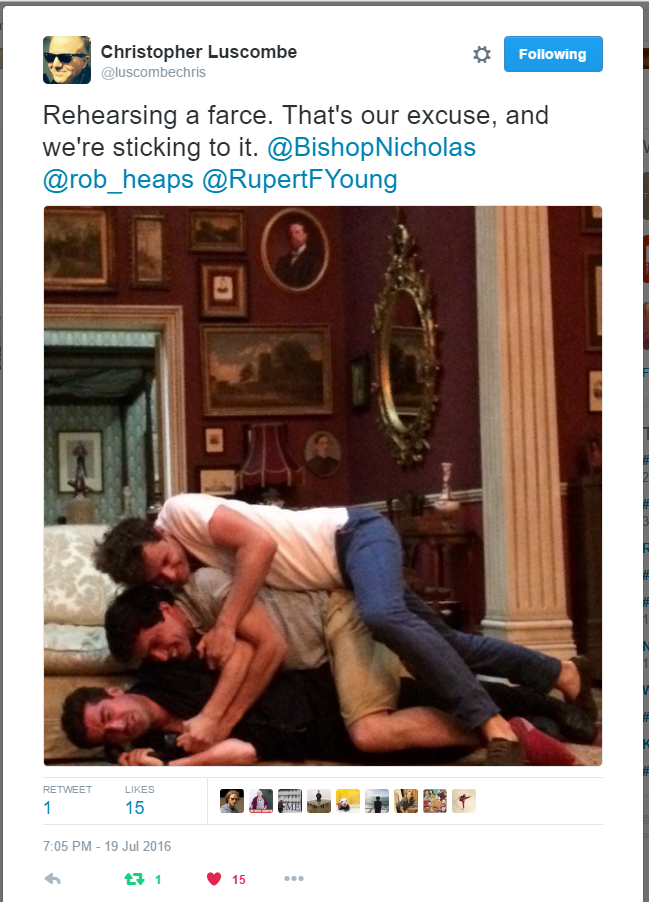 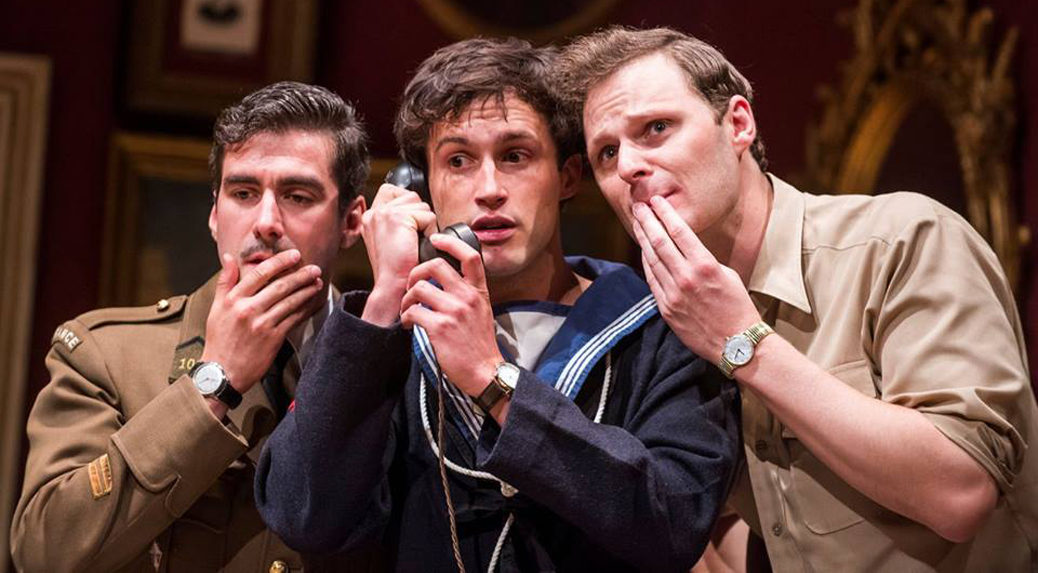 This play by Terrence Rattigan was written in 1943, and is set in that period – in the latter parts of the Second World War when London was awash with Allied soldiers not to mention a sailor or two. The action takes place over a 24-hour period, in Lord Harpenden’s chambers in ‘Albany’, a fancy apartment block off Piccadilly in London. The production was directed by Christopher Luscombe.

Rupert plays an American lieutenant, Joe Mulvaney, who befriends the Earl of Harpenden (Rob Heaps) and becomes involved in various ways with the two women in Lord Harpenden’s life, Lady Elizabeth Randall (Alexandra Dowling) and Mabel Crum (Tamla Kari). Mix in a butler, Elizabeth’s father, and a French lieutenant, and the laughs are guaranteed.

The show was very funny, and amusing throughout, even when it became clear that hearts and future happiness were at stake. The set was gorgeously detailed. All the cast were great, and Rob was particularly touching in the early-morning scenes when he seems to have lost everything.

Rupert was his usual superb self, of course. He’s just too good at these romantic and comic roles! Not to mention that we get to see rather more of him than I’ve seen thus far … bonus!

It’s a really fun evening, and I’d recommend going if you’re at all interested.

I said hello to Rupert afterwards at the stage door, and he was his usual charming self. ♥ He is in the process of switching agents to Curtis Brown, though he’s not listed there yet. I also noticed that the theatre programme lists Rupert as appearing in People Just Do Nothing, a BBC 3 show. He said that it was only a couple of scenes – but that’s something new to watch out for. Hurrah!

… the American Lieutenant Mulvaney, played by Rupert Young (who is like a young Liam Neeson) … Nancy Connolly at the Bath Chronicle

In this flurry of crossed-wires and mistaken identities Rattigan shows himself as a versatile writer and farceur. For those who have only caught his darker works, this is a welcome breath of fresh air.  Marion Sauvebois at the Swindon Advertiser

Rupert Young is excellent as Lieutenant Mulvaney, playing to the full the role of a stereotypical Yank bowled over by meeting English royalty, comically matched by his rival in love Lieutenant Colbert, played with Gallic passion and cod-French accent by Nicholas Bishop. Jackie Chappell at Listomania Bath

Rob Heaps’s charmingly puppyish Bobby is a cheerfully ineffectual individual who after four years in the Navy has failed to become an officer and who sees nothing wrong in his butler tying up his boots each morning, much to the incredulity of Rupert Young’s down-to-earth Joe. … Heaps is ceaselessly endearing as Bobby … Claire Allfree in The Telegraph

The Telegraph review makes a great deal of Bobby’s uselessness, but I think his kindness, decency and cheerfulness more than outweigh these considerations. Just because the world was in transition to a more merit-based notion of leadership doesn’t mean that all the old-fashioned values need be thrown out with the bath water. I thought it also counted in Bobby and Elizabeth’s favour that they were perfectly prepared to do war-work and serve their country in rather more humble roles than they might have expected. (It’s worth noting that neither of them make use of her father’s Old Boys’ Network.) Not doomed, I think, when they are adjusting to change and accepting new roles.

… an utterly glorious, hilarious ride from start to finish, bringing a beautifully-directed ensemble cast together in perfect harmony and earning a big shiny gold star for director Christopher Luscombe, who has skilfully revived one of Rattigan’s lesser-known comedies with an invigorating blast of fresh air. All the action takes place in the young Earl of Harpenden‘s apartment in Albany, London (interestingly enough, the luxurious set is an exact replica of Rattigan’s actual apartment, in which Rattigan wrote the play). Melissa Blease in The Bath Magazine

The proceedings unfold over 24 hours in the Albany “chambers” of Bobby, the young Earl of Harpenden.  It’s the eve of his wedding and the show kicks off with a tease when, naked but for a bed-cover, a strapping American officer, Joe Mulvaney, emerges from the bedroom.  All innocent, of course. … it’s delectably droll to watch the whole chaotic sexual license of wartime exemplified by these rather tidily choreographed shenanigans. Romantic rivals who share a chaste bed, the stereotyped Allies are played with engaging panache by Heaps, Rupert Young and Nicholas Bishop as the French lieutenant … Paul Taylor in the Independent

Immaculately staged and directed by Christopher Luscombe the cast are outstanding. … Nicholas Bishop (Lt Colbert) and Rupert Young (Lt. Mulvaney) provide much humour in their confusion and attempts to repair the damage. … This is a fine production; the humour is well balanced with impeccable timing whilst the physical theatre set pieces resulting in an absolute treat. Petra Schofield at Theatre Bath

It’s hilarious. Or, at least, this production directed by Christopher Luscombe is. … It is almost perfectly cast. Ann Treneman in The Times 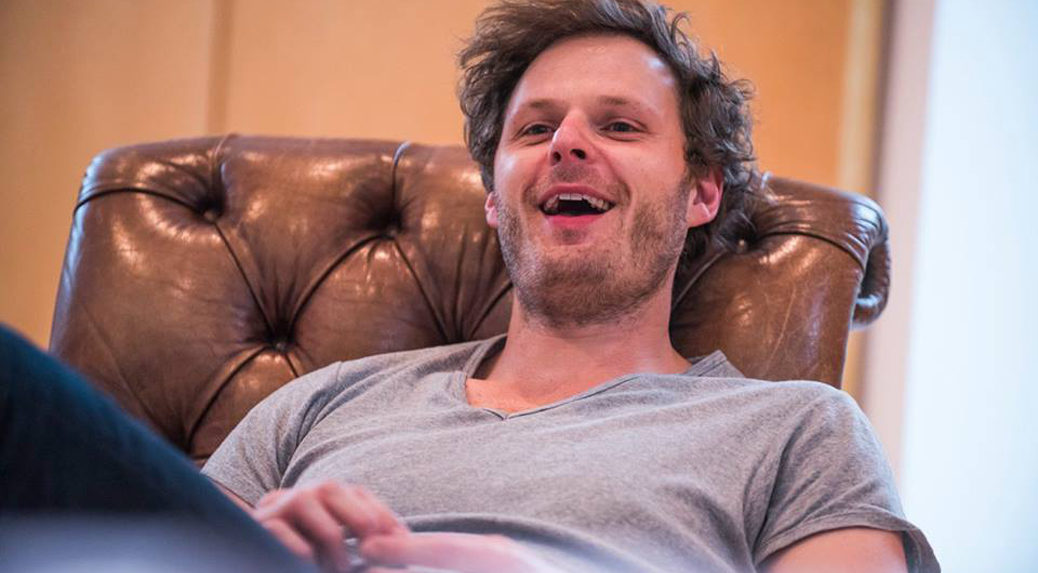