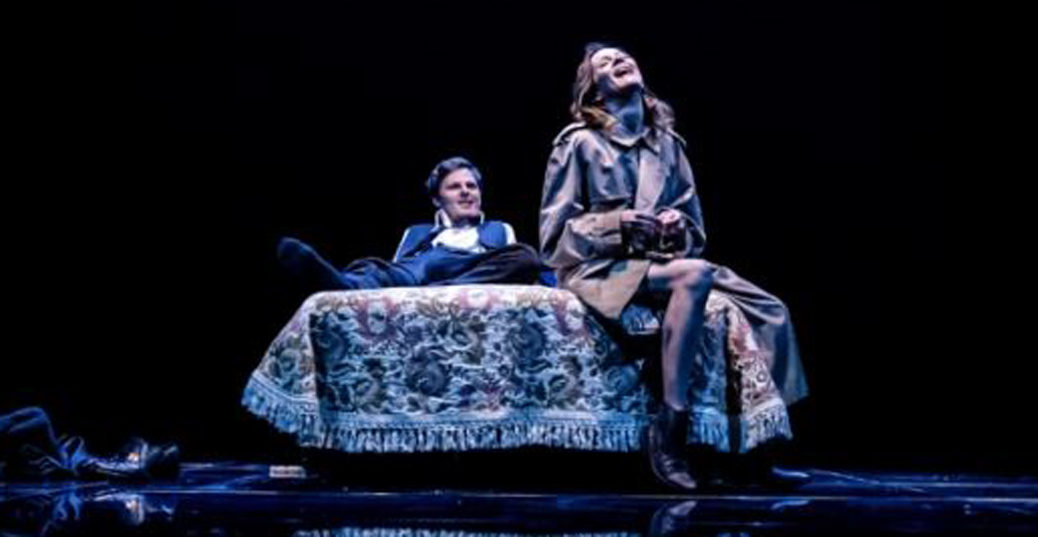 Rupert is the character Codename Lazar in this production of David Hare’s play Plenty, at the Chichester Festival Theatre from 7 to 29 June 2019. The director is Kate Hewitt, and Rachael Stirling plays the lead character Susan Traherne.

5 stars from Gary Naylor for Broadway World UK: Rachael Stirling holds the narrative together, her Susan frightened, ecstatic, cruel, seductive, charming and charmless. She’s never at ease, the old espionage agent’s compulsive desire to look over the shoulder of the person to whom one is speaking, both a literal and metaphorical compulsion.

Amongst the fine support, Yolanda Kettle shines as would-be artist Alice, the dilettante surrogate daughter, whose on-off emotional, sexual and financial dependency on Susan appeals to her fantasy of replaying the rescue scene in the forest over and over again.

4 stars from Michael Billington for The Guardian: Rachael Stirling is excellent in Kate Hewitt’s invigorating production of a play about individual and national unease.

4 stars from Ian Murray for WhatsOnStage: Some will no doubt see Plenty as a dissection of madness, yet it is more than that. It is the question of what someone will do to be truly free regardless of the consequences.

“The fact that you could meet someone for an hour or two and see the very best of them and then move on. Can you understand?” she [later] tells a diplomat called Brock …

Phil Hewitt for Chichester Observer: There are fine moments in Kate Hewitt’s revival, and she’s assembled a fine cast; but it’s difficult to believe that this is David Hare at his best or even a David Hare particularly worth revisiting.

2 stars from Dominic Maxwell for The Sunday Times (paywall): Meaty main role ends up overcooked in revival of modern classic.

Matt Merritt for The Portsmouth News: Rachael Stirling gives a fine performance in the leading role; building to eruptions of grief, purposely baiting Brock’s bosses over Suez. She’s never really served by the material though. It doesn’t help that some of her most important dialogue is thrown away as a recording to cover a scene change.

This, we’re told, is a modern classic. For the life of me I have no idea why and the hard work of the cast can do nothing to dissuade me.

4 stars from Tim Walker for The New European: On the surface, this is an incredibly stylish piece of theatre complete with great recreations of ambassadorial black tie dinner parties and parachute jumps into enemy territory. Nina Dunn’s video design is superb with its moody images of Stirling projected on to the walls, and, at the end, the whole stage opens up as much as the characters.

On a deeper level, it amounts to a timely full-blown exercise in psycho-analysis for the nation, and it asks a question pertinent to our times: what ultimately have we got, when we take away the occasional historic moments of unity and acts of heroism, to bind us all together? In short, who are we? I’m honestly not sure any more.