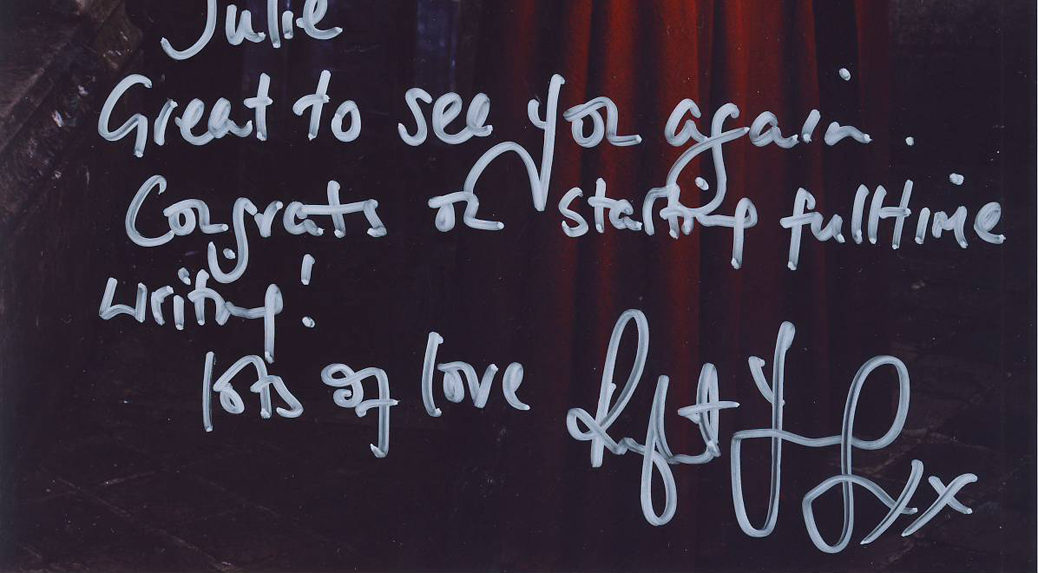 I have had the most awesome Ruperlicious day today! Rupert attended MCM Comic Con in London, along with Merlin castmate Alex Vlahos, on the Saturday and Sunday. They seemed to be having a fun time of it, and the fans certainly were, too.

I started off my Sunday with an autograph from Rupert. He was kind enough, as usual, to ask me what was happening with me, so I told him my big news – which is retiring from the day job, and being able to write full time. He was appropriately congratulatory in response! 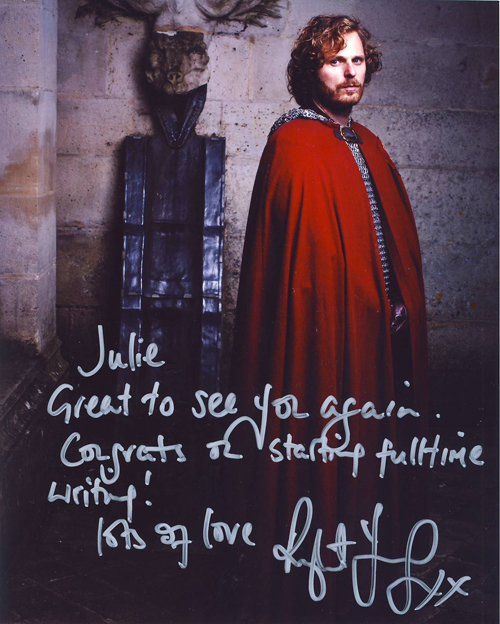 It’s been far too long (for us fans, anyway!) since we saw him last in Wrexham, but he seems to have enjoyed taking some time out.

He seemed pretty impressed by my Sir Leon t-shirt, which is a Red Scharlach special, and he quizzed me about it at length. So (later in the day) I asked if we could take a ‘reaction shot’ for Red…

After my Rupert autograph, I went to seek one from Warwick Davis. He’s such a great guy with us fans, has the most gorgeous smile, and he’s just been in everything that’s anything – including Merlin, of course!

I had to ask them for a Merlin photo, as there weren’t any on display – but a very nice one was duly forthcoming, and I asked him to sign it with ‘Courage, Strength and Magic’. He is such a sweetheart. ♥ 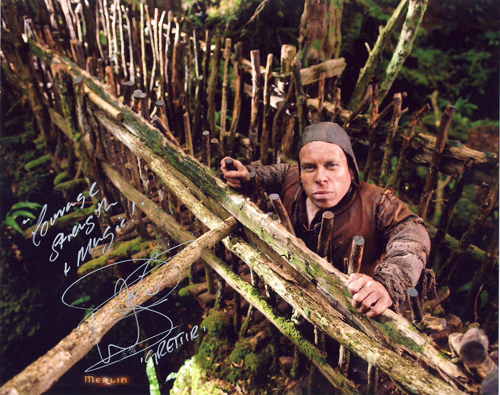 I also bought a copy of his book Size Matters Not, and he signed that for me, too.

Next up was a panel with Alex and Rupert, hosted by a woman who did an excellent job of it. Alas, I don’t think she introduced herself, so I’m not sure of her name. Or if she did, it was while Rupert and Alex were mucking around casting shadows on a back-lit screen, and making us all giggle.

I took notes, though as usual I am sure I didn’t catch everything. One tends to get caught up in the banter, and then entirely lose the thread.

Do you miss Merlin?

Do you still all see each other? You’ve still got the banter.

Was the sword-fighting the best part?

You seem to have a fan-base of all ages.

Alex, you started as a fan of the show.

Which of you is the better knight?

There was that romantic notion of the perfect knight…

Was he too good to be true? Was he jealous of Arthur?

Katie has said she tends to be Morgana’d [made to look like Morgana] when doing period drama. Do you find that?

Audience member: Do you ship Merthur?

Audience member: Do you have any dreams not yet fulfilled? Not professional ones.

Host: Have you thought about rebooting the show?

Audience member: In the legends, Mordred is the son of Arthur. Alex, did you ever call Bradley ‘Daddy’?

How much research did you do about the Arthurian legends?

Host: Are there any skills you learned in Merlin that you’ve used since?

Tell us about Bradley as a practical joker.

If Mordred had lived, would he regret killing Arthur?

Should Camelot have allowed magic?

If you could rewrite the ending, what would you change?

What would be their future lives?

Audience member: Rupert, did you enjoy doing the Philly ad?

Audience member: Which show would you cross-over with Merlin?

Rupert’s nephew: Which was your favourite scene to film?

What’s your favourite scene that you were both in together?

Host: What are you each doing next?

The host thanked Rupert and Alex very kindly for their time, and they left to much applause from a loving audience.

I had ‘official’ photos taken with Rupert and with Warwick. Who were both absolutely lovely about it. 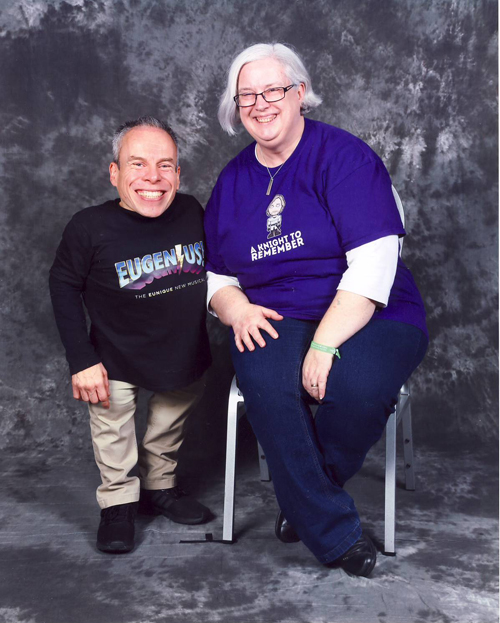 And then!!! I had the privilege of interviewing Rupert and asking him lots of questions. He was very kind in response.

It will take me a little while to write that up, as the day after the con Mr B and I were off travelling for the week, but I promise to do it very soon.

In the meantime, thank you for reading this far! I hope you enjoyed the con, either in person or vicariously through this post and others. It’s been a real pleasure. ♥