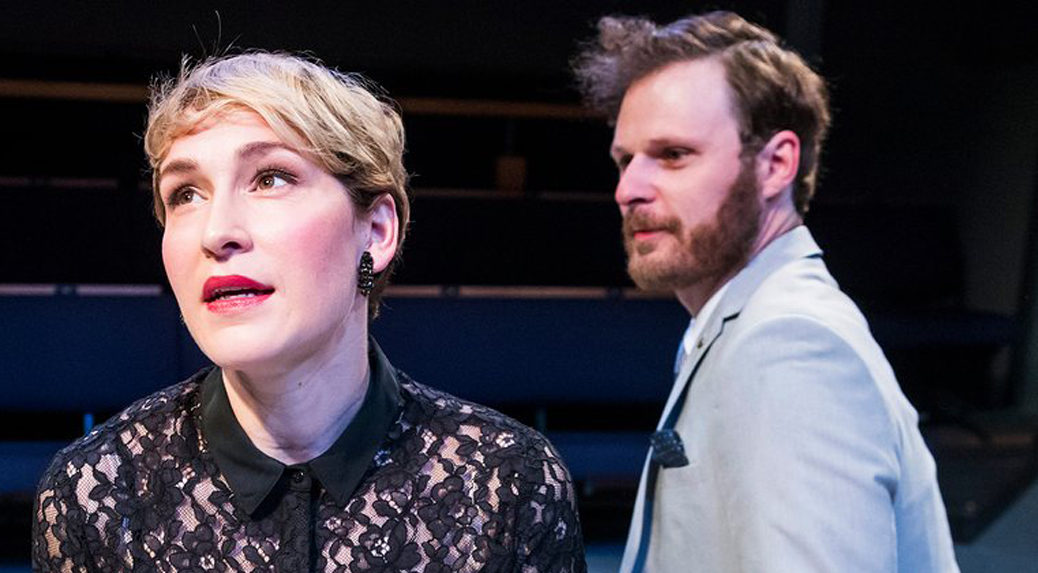 The clashes in theory and practice between the older, protective fathers, and the modern, independent younger characters, sparked a great deal of humour. The repartee bounced back and forth like a professional tennis match, made all the more interesting because no one was entirely wrong, and certainly no one was entirely right.

The whole thing was very funny, and the audience were carried along by the humour right from the start. Being rather partial to the actor, it’s quite possible that I was swayed more towards the philandering side of the argument than Shaw really intended. Rupert sauntered insouciantly along the line between charm and a refreshing honesty on one side, and unscrupulous manipulativeness on the other – and made it look effortless, too. He shouldn’t be so good at this. It plays delicious havoc with my heart.

The play was performed in the round, with two levels of seating. I haven’t been to the Orange Tree before, but I understand this is the permanent set-up. The place is so small that there are no bad seats in terms of views! (I have to say they are not Julie-sized seats, however.)

The sets were minimal but effective, with the whole being suggested by a few bits of furniture and props. I loved the set for the first act best, which took place in an elegant apartment. Though the other sets were effective, they just weren’t as attractive. Perhaps that was the point, however, as after all this was intended as a satire – and indeed Shaw first published it as one of three Plays Unpleasant, in 1898. (You can read up on it via Wikipedia, though (as usual) beware spoilers!)

Well, I have to say I didn’t find the play unpleasant at all, though it is quite cynical at the core. It’s also fun, and clever, and occasionally very very real. Over a hundred years later, Shaw still has plenty to say – and I love the way Rupert and the rest of the cast say it, too.

The eponymous Philanderer, charismatic Leonard Charteris (all rumpled charm and biting wit shot through with sudden shafts of surprising cruelty in Rupert Young’s debonair performance) finds himself torn between two very different women … Ultimately it is perhaps surprising how refreshingly modern the piece feels, the writing of the dialogue is masterly, and this is a superb cast. All in all, well worth the trip to the end of the District Line. Alun Hood for What’s On Stage

The story follows cad-about–town Charteris – a charismatic Rupert Young – as he manipulates, charms, and condescends to every woman he encounters. … the strong cast keeps the energy high and the dialogue snappy. Dave Fargnoli for The Stage

The performances abound in Shavian vitality. Dorothea Myer-Bennett is outstanding as Julia, suggesting a tiger advancing stealthily on its prey, the crop-haired Helen Bradbury exudes a beautiful poise as the amazing Grace and there is good work from Rupert Young as the egotistical Leonard and Michael Lumsden as Julia’s army-bred dad who, in the play’s funniest line, tells her: “I’m not speaking as your father now – I’m speaking as your commanding officer.” Michael Billington for The Guardian

You leave with an impression of much clever irony, good acting – and a vast wodge of words. Quentin Letts for The Daily Mail

The title character of Bernard Shaw’s 1893 play must be one of the most unbearably slappable male leads in English theatre. Leonard Charteris (Rupert Young) is a smug proto-feminist who shamelessly manipulates two women and their respective fathers, in a comedy that’s brought to fizzing life by Orange Tree artistic director Paul Miller. Alice Saville for TimeOut London

Despite Young deploying all of his twinkly-eyed charm, it’s hard to warm to the glib, condescending yet supposedly irresistible Charteris, whom Shaw declines to invest with much inner life. Marianka Swain for theartsdesk.com

Director Paul Miller subtly puts the play in a contemporary setting, with modern dress and décor without updating the text, in an admirably unfussy and fresh production. … Rupert Young makes an amusingly amoral Charteris, a provocative Ibsenite philosopher who wants to keep his options open but who realises he will always essentially be alone. Neil Dowden for Londonist

The hipster aesthetic is maintained, more subtly, in the modern-with-echoes-of-Victoriana attire of the actors on stage. Rupert Young as Leonard Charteris, the womaniser of the title, wears dark jeans and brogues, complemented with a smart jacket, shirt, tie, pocket square, beard and elegantly dishevelled floppy hair. … Social mores may have changed since Shaw’s day but the sexual politics explored in the play still feel resonant and the author’s sharp wit remains timeless. Young, as Charteris, has a relaxed self-possession and world-weariness and seems a victim of his own, almost unwitting, charm. Peter Coe for The Good Review

As Julia, Dorothea Myer-Bennett is in cracking form. Radiant and spiky, her intelligence pervades every aspect of her performance, whether she is bitter snarl mode or shameless-display-of-feminine-wiles mode. Myer-Bennett makes the character strong and frail, complex and simple: it’s a performance of real grace, real skill. Matching Myer-Bennett’s Julia every step of the way is Rupert Young’s Charteris. Afire with sexual charm and smooth patter, Young insinuates himself into the audience’s affection in exactly the same way he works on Julia and Grace. We know he is appalling but, somehow, he is also appealing. The production’s best moments occur when Young and Myer-Bennett spar, and the delicious scene where divorce is discussed and used as a tantalising tease, a bargaining chip, is a real delight. Stephen Collins for Live Theatre UK

Charteris is a portrait of Shaw and the first draft for John Tanner in Man and Superman; but played by Rupert Young with charm and in a much lower and less blazing key. Robert Tanitch for Mature Times

Shaw drew for the character of Julia Craven on his experience with his first, rather late-in-the-day love. Dorothea Myer-Bennett renders this woman, struggling not to live up to her surname, with palpitating, tear-drenched conviction. There is something of Shaw in Rupert Young’s philanderer, though his jutting beard is more persuasive than the delivery of his verbal flights. Helen Bradbury is beautifully cool as the other woman involved in a sexual triangle which is also an intellectual boxing match. Susannah Clapp for The Observer