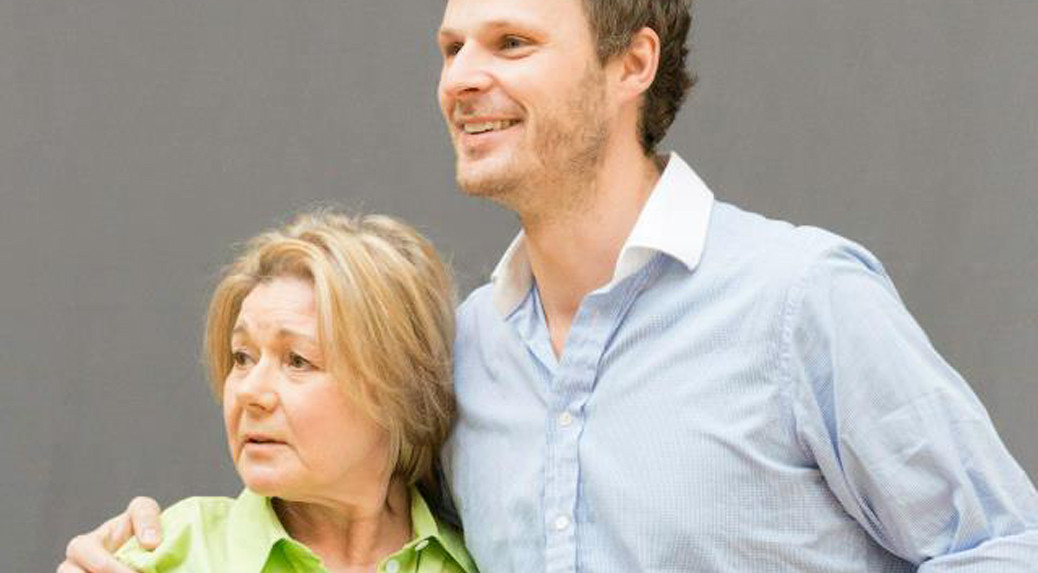 Oh my, it seems a long time between drinks, but Rupert’s back on stage again, doing what he does so sublimely well …

Rupert is starring as CK Dexter Haven in High Society at the Old Vic Theatre – and for a lovely long run, too, from 30 April to 22 August 2015. I just went to see the first show this evening, and loved every minute of it.

Although the Old Vic is a ‘traditional’ theatre with a proscenium arch, it has been transformed so that this production is played ‘in the round’, with the action centring on a circle surrounded (rather closely!) by the audience, and the musicians in two balconies above. Some of the set transformations have to be seen to be believed; these are nimbly aided by about half the cast and ensemble who play the staff of the estate.

The setting is Seth Lord’s (Christopher Ravenscroft) estate on Long Island, on ‘a glorious Saturday morning in June 1958’. Family and guests are gathering as Seth’s daughter Tracy (Kate Fleetwood) is getting married on Sunday to George Kittredge (Richard Grieve). Amidst a happy swirl of staff, the silk-rustling whirl of a ball is being prepared. In the midst of all this, Dexter Haven (Rupert) shows up. We discover that he is Tracy’s former husband – and we soon realise that ‘he’s a right guy’, if for no other reason than that Tracy’s little sister Dinah (Ellie Bamber) adores him. Complicating matters in charming ways are the undercover journalist duo Liz Imbrie (Annabel Scholey) and Mike Connor (Jamie Parker).

Ellie Bamber is a delight throughout the show as Dinah, and Rupert was absolutely wonderful as her friend, especially in the affectionately playful song ‘Little One’. Rupert is also great as Dexter relates to his former mother-in-law (Barbara Flynn), and he absolutely shines in the clever banter of ‘Well, Did You Evah?’ Of course the beautiful duet ‘True Love’ was guaranteed to have me in tears. I love how an article in the program describes Dexter as embodying ‘easy wit and gentle irony’ – the sort of thing Rupert does so deliciously well. But leaving Rupert aside for just one moment, I have to say I also enjoyed the love stories involving the more mature characters, both upstairs and down.

The entire cast and ensemble is wonderful, as are the musicians, including consummate showman Joe Stilgoe. It seems wrong to single anyone out for special praise (except Rupert, of course, being the subject of this site!) as everyone delivered their role beautifully – and everyone seemed full of a happy energy. The show is a great deal of fun, and there are some terrific set pieces, which I won’t spoil for you here. Director Maria Friedman has obviously brought a great deal of creativity to the project! But at the heart of it all is a moving story of love and of personal growth.

The bottom line is: Highly recommended for anyone who enjoys a fun night of theatre!

Rupert Young’s Dexter Haven is loose-limbed and lovely-voiced, with an old-fashioned cheeky chivalry that lets the character sneak by as lightly charming rather than manipulative. The Independent, 16 May 2015

… although Rupert Young cannot banish memories of Kevin Spacey’s CK Dexter Haven in the Barry play, he nicely suggests the gilded privilege of wealth. The Guardian, 16 May 2015

Rupert Young is positively dreamy as the cool and endearing Dexter. Official London Theatre, 16 May 2015

… Tracy Lord’s old flame, Dexter Haven, here played with a modicum of charm but minimal dash by Rupert Young. What’s On Stage, 16 May 2015

As the charming, yacht-loving C K Dexter Haven, Rupert Young gives his all. He is genuinely pleasing in most respects, and his scenes with Ellie Bamber’s bratty Dinah are genuine and awash with rapport. He mostly gets away with the singing, but that is not his forte. (Indeed, apart from Parker and Rawle, there is no one in the principal cast whose forte could be said to be singing – a curious position for the cast of a musical to be in.) Young brings a casual masculinity to his scenes which is endearing, but, in truth, the part requires more than that. Deep down, the audience has to want Dexter to end up with Tracy rather than either Mike or her current fiancée, George. But as Mike is by far the most charismatic and persuasive, that is not how things play out. British Theatre, 16 May 2015